The City of Greenfield, WI

The city of Greenfield is older than it seems, having been unofficially founded in 1839 as the Town of Kinnikennick. Shortly after the town of Franklin split off in 1840, the town’s name was changed to Greenfield, being named after the Post Office in the Town of Kinnickinnic. It wasn’t until 1957, however, that the town officially incorporated into the City of Greenfield as it is known today.

Although there aren’t nearly as many green fields today in Greenfield as their were in the 1840s, this geographically sprawling city is still known for its tree-lined blocks, natural beauty, and award-winning parks. And where farm fields once stood, there are now plenty of successful commercial businesses and city parks.

Greenfield homeowners value their property, which is precisely why most know how important it is to schedule a fireplace or chimney inspection annually. And, whether it’s to get professional help for the swifts in your chimney or it’s time for a full-service chimney restoration, you should know you can trust Smoke Stacks, Inc. for all of your chimney and fireplace needs.

Does your fireplace smoke when you use it? Does your chimney have creosote buildup? Do you even know what creosote is and the danger it can pose to your property and family?

Whether you use a gas fireplace or a wood-burning fireplace, having it regularly cleaned and inspected is vital to keeping it operating at peak efficiency. Timely chimney cleaning is also key to removing harmful deposits and for catching small problems before they can become serious ones.

As part of our comprehensive chimney sweeping services, we will thoroughly scrub your chimney to remove creosote deposits and inspect your chimney for other common obstructions (such as debris and wildlife). Why remove creosote? Because if left unchecked it can create a health and fire hazard for your home.

The last thing you want is to find out your fireplace is broken and can’t be used when you’re stuck home on a snow day! Call Smoke Stacks, Inc. today to schedule an inspection or cleaning—that way you’ll know you’re ready to get your fires roaring when the weather’s right! 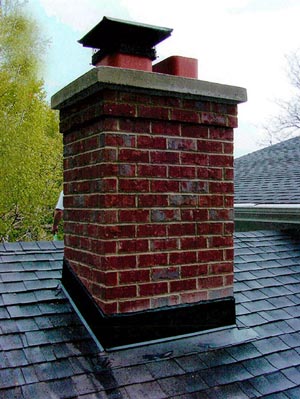 Is It Time for a Chimney Inspection?

When was the last time you had your chimney inspected? If it’s been longer than you can remember or your fireplace is showing signs of distress (such as smoke or physical damage, for instance), it’s time to have your fireplace inspected by a professional.

Think you can wait because it’s summer? Think again. Since you never know what problems you might find, anytime is a good time to have your chimney inspected.

If you live in Greenfield or any of the surrounding communities, call Smoke Stacks, Inc. today to schedule a chimney inspection or sweeping. We offer comprehensive chimney repair and restoration services—including crown replacement, crown repair, relining, tuckpointing, chimney sweeping, and more—in Greenfield, WI and throughout Milwaukee County.

"I would recommend Kurt for any chimney work. I have used Kurt twice and will use his chimney services again and again. Thanks for jobs well-done!" Leslie of Waukesha WI

"This is a first class job! Very professional, Kurt picked out a nice brick for us. We are very satisfied!" Art, Waukesha WI

"We chose Smokestacks over several other contractors, because he seemed the most knowledgeable about the problem we had. We used to get smoke into the house and had a poor draft even after another company rebuilt the chimney. Mr Soens solved our problem exactly the way he described he would, and now we enjoy having fires whenever we can." Shane and Michael Morris, Hartland WI

For years, people throughout the greater Greenfield, WI areas have been turning to Smoke Stacks, Inc. for their chimney repair and relining needs. At Smoke Stacks, Inc. we believe that attention to detail, professional work, courteous service and honest prices are the qualities that make the difference.